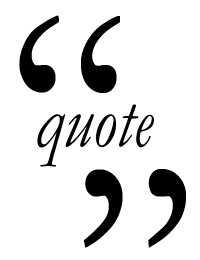 By the way, notice that it is quotation marks with an “s” as they occur in pairs (“ ”) or (‘ ’).  Even though the full name is quotations marks, sometimes people would just call them quotations or quotes for short.  Now, how would English speakers read a sentence with quotations, like the one below?

Charles Dickens once said, “A loving heart is the truest wisdom.”

They would say “quote” when they reach the first quotation mark, read the quote, and then say “end quote” to give credit to the original author for the quoted material and to differentiate what he said from the rest of the sentence.

There are three main situations when quotation marks are used in writing:

She said that the book is “interesting and deep.”

2) The second usage of quotation marks is for notating the titles of the following list of short or minor works:

Articles in newspapers, magazines, or journals

Episodes of TV or radio series

“Amazing Grace” is one of my favorite songs.

One of the headlines in The Los Angeles Times on October 2, 2009, was:

Here the author is quoting and emphasizing what Letterman’s extortionist said.

Here the author is suggesting that maybe the cooperation is not really cooperation.  One would have to read the article to find out.

This entry was posted on Sunday, October 4th, 2009 at 6:22 pm and is filed under Punctuation Matters. You can follow any responses to this entry through the RSS 2.0 feed. You can leave a response, or trackback from your own site.